Few enemies now stand in your way of becoming the Elden Lord. Here's how to make short work of the larger than life Fire Giant.

There's no doubt that in Elden Ring, you'll face a variety of seemingly insurmountable foes. But none are quite like the Fire Giant, possibly one of the most frustrating foes you'll face as you march toward the endgame. Not only does the Fire Giant live up to his name, as he's a gargantuan humanoid foe who spits fire straight from his chest, but the lengthy battle is grueling in ways that require proper preparation.

That includes learning to play the entirety of the field surrounding the Fire Giant and remembering to stay on your horse. It's far from a cake walk, that's for sure. Plus, this mammoth boss isn't optional, meaning you'll have to defeat him if you want to reach one of the game's several endings, and he's standing right in the way that.

Want to learn how to beat the Fire Giant in Elden Ring? We've got your back, every step of the way. Here’s the best method to go about it while paving the way to becoming the Elden Lord. 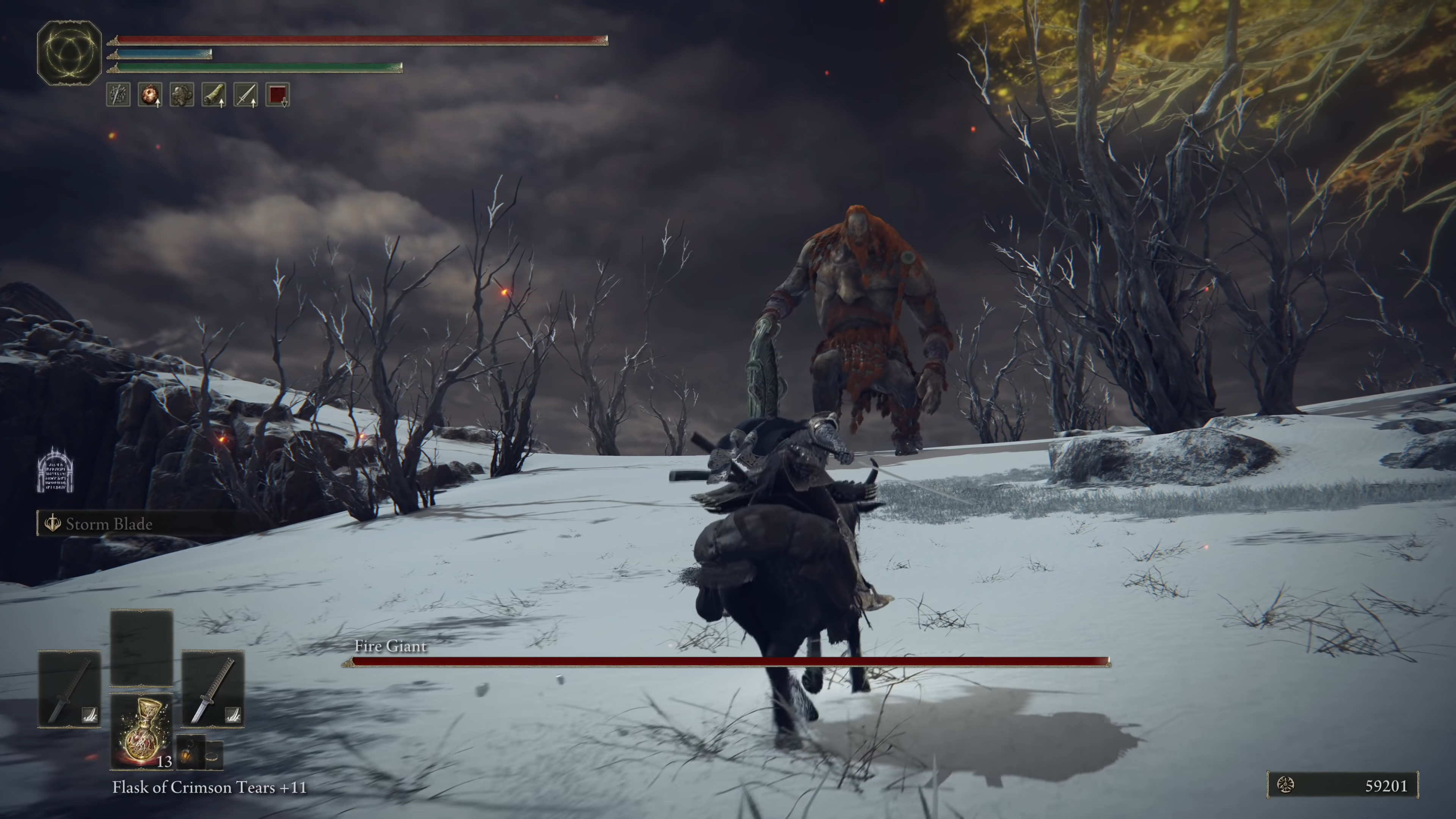 Once you've conquered Leyndell, the Royal Capitol, along with Morgott, The Omen King, it's time to head to the Forbidden Lands by way of the Grand Lift of Rold. Look out in the distance to find what appears to be a larger-than-life forge. Make your way toward it, ascending the Mountaintop of the Giants, until you reach the Flame Peak. Your mission continues here as you march toward burning down the massive Erdtree. First, however, you need to defeat its guardian, the Fire Giant.

The Fire Giant is a difficult Legendary Boss that may take you several tries to defeat. But once he's out of the way, you'll be that much closer to completing the game and seeing one of its multiple endings. This big, ridiculous monster is one of the largest bosses you'll have encountered throughout Elden Ring just yet, and you'll feel every bit of the size and scope as you scurry around trying to dodge his swipes, punches, and AoE attacks. But don’t worry: follow these tips and you’ll emerge victorious in no time.

As the fight begins, you’ll want to first summon a Spirit Ash to keep the Fire Giant distracted. A Mimic Tear is your best best here, as it deploys a mirror version of your Tarnished character to fight alongside you. If you haven't gotten this Spirit Ash, any of your others will do, as they're going to run interference while you do the actual work. 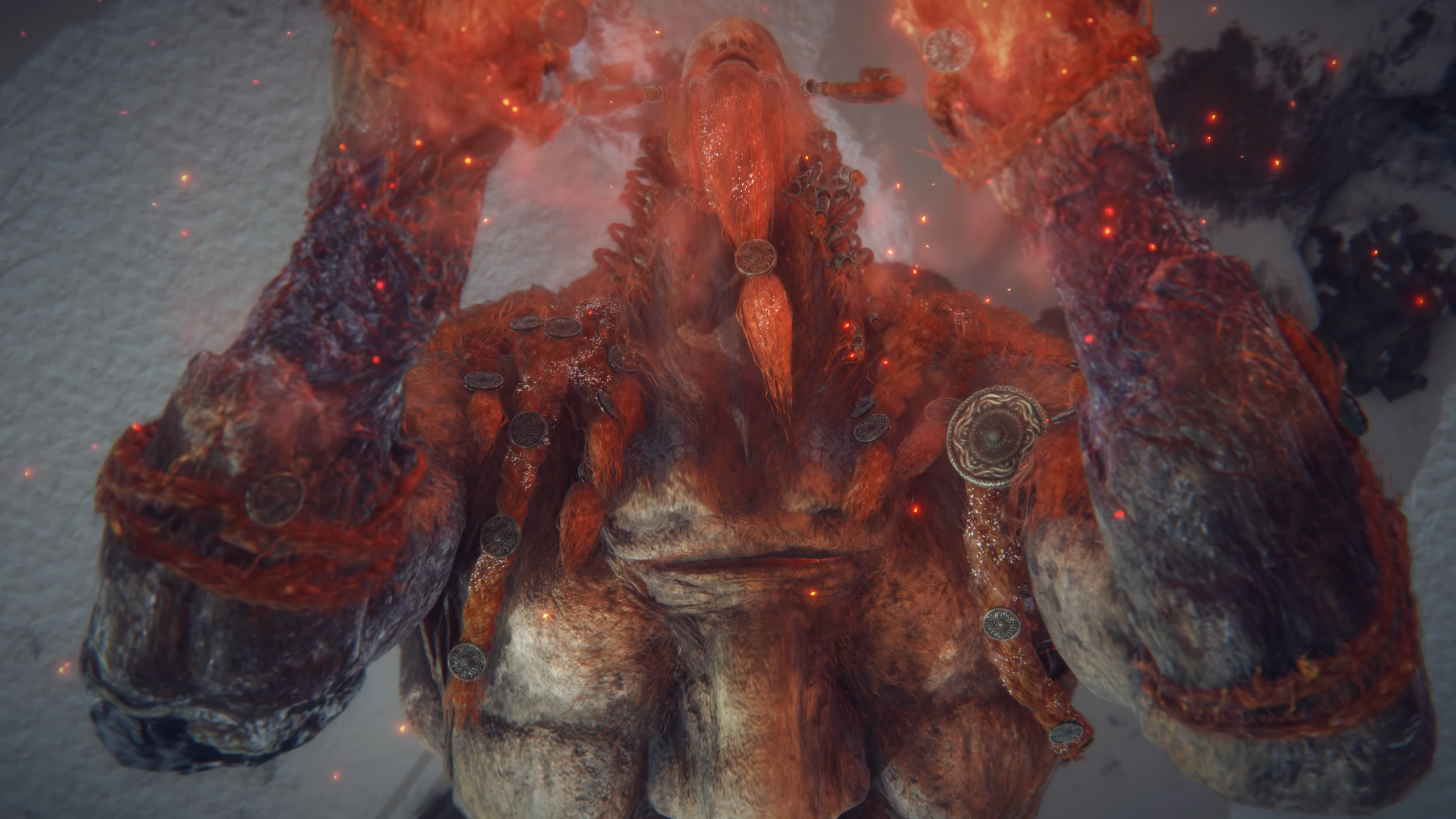 Once you've done that, make your way toward the Fire Giant as quickly as you can on foot and unleash a flurry of attacks on his ankle. Move away when necessary when the Fire Giant swings his enormous shield, then go right back to attacking the same ankle. Free target the ankle, as you may find that you can't stay affixed to the same area when targeting. Stay as close as possible to the Giant, as this makes his various attacks much simpler to dodge, especially his massive AoE fire attack. If he seems to be summoning flames, run away immediately. Stay far enough away until you can close in again and whittle away his health. Don't switch ankles. Wail away as much as you can until the ankle breaks.

After the ankle is broken, you'll move on to Phase 2 of the Fire Giant fight. At around 50% health, the Fire Giant will tear off his own ankle and awaken a terrifying part of his body: an enormous face in his chest that can spew fire. From here, things are going to be a bit more difficult, but remain patient and ignore the temptation to start attacking his hands, as they inflict a massive amount of damage. Instead, continue attacking the Fire Giant's ankles and feet, just the same way you did before.

It's going to take some time to hammer away at his health, but you won't be as close to his massive hands that can push you away and force you into flaming AoE attacks, which mean swift death. If you can swing it, when the Fire Giant is stunned, lay a few smacks right into the eye in the middle of his chest. Pepper these strategies with defensive rolls, and make sure you stay away from the volleys of fire magic he sends after you. Keep chopping away at those feet, and eventually this giant will fall. 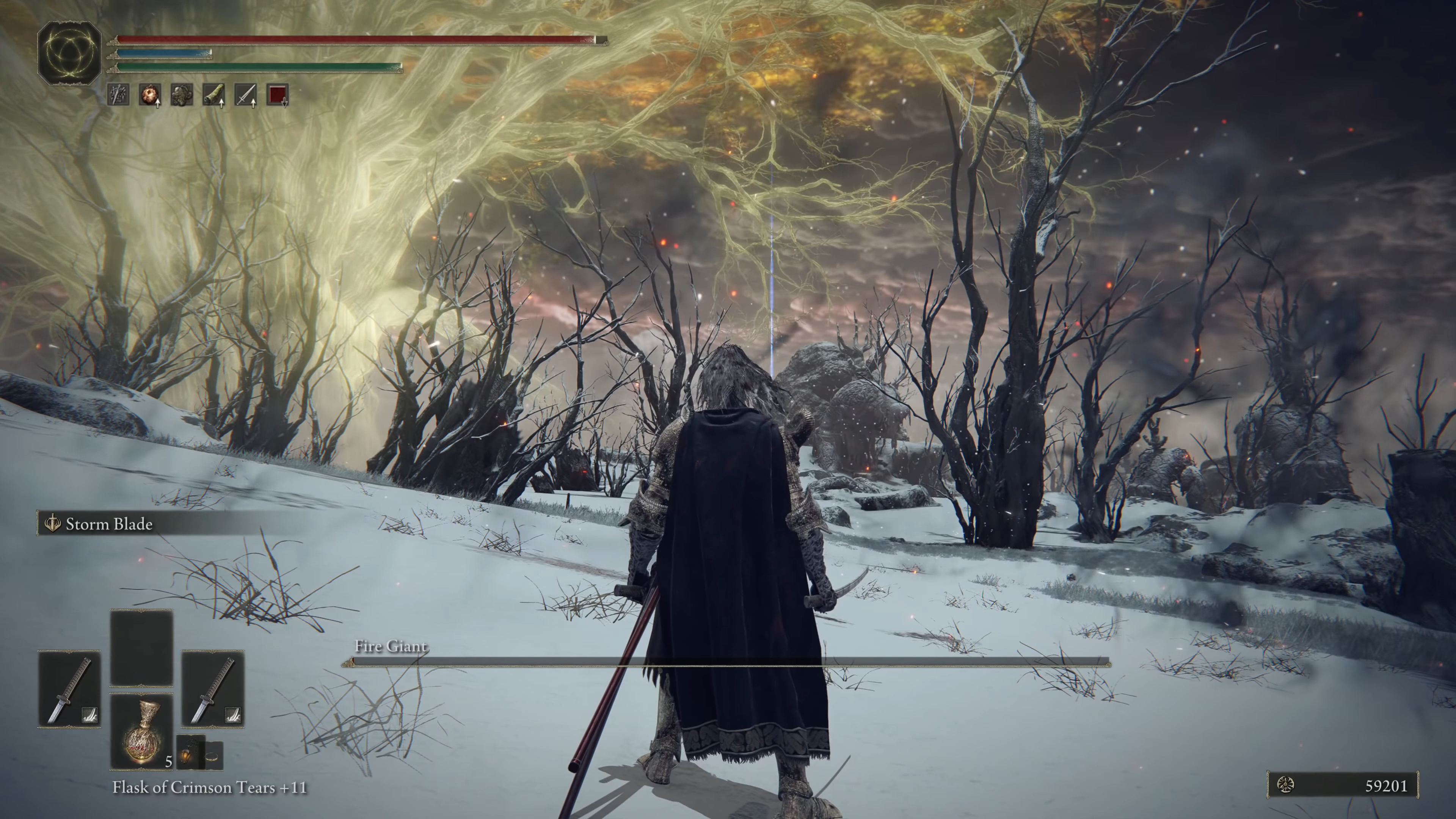 When you defeat the Fire Giant, you’ll be rewarded with 180 000 Runes and the Remembrance of the Fire Giant. Moreover, you’ll be granted one very useful thing: passage toward the Forge of the Giants, where you can kick off the beginning of the end of Elden Ring.

Congratulations! You're well on your way to becoming the Elden Lord.

Also check this out: 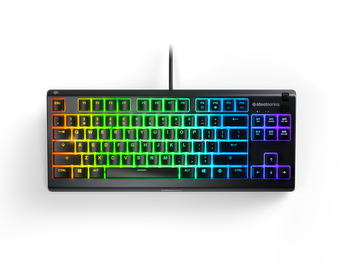